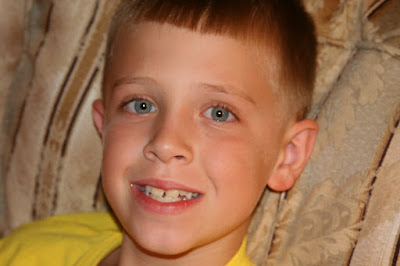 We had a good time last night! I picked William up at the daycare then we went to the barber shop for a haircut. While in there, the barber said he wanted me to look in a box!! What?? He said "she" wanted to go home with us!...LOL...It was a puppy. Sorry, didn't get a picture, darn! It was a cross between a poodle and a Chihuahua. It Was really cute, but no thanks. Corky's 17 years old and declining. I just couldn't do it. Will asked Crystal though...Hahahaha...Don't think that puppy is gonna get to go home with William either! After we got home, I fed him and he played Guitar Hero, watched TV and wrestled with me and Gampa....Crystal and "T" took Samantha to a concert...Don't Even ask me the name of the group....clueless!lolol....William stayed with Gamma and Gampa... 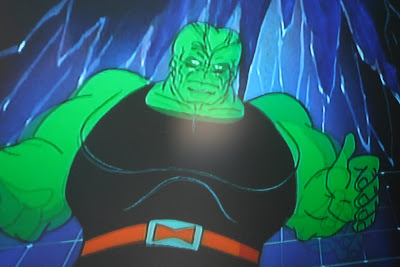 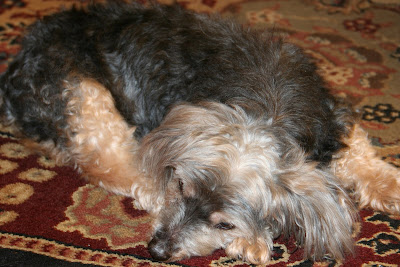 Corky had the right idea though! He just slept through it all! Smart old dog... I can see already, I won't be able to get back into my book...Acheron. I tried to discuss this with Crystal, but she just screamed and covered her ears, singing...LALALALALA.....!!!LOLOL.....GEEZ!! Later, she said she'd been waiting a Year for it to come out and I was just about to spoil it for her!! OOPS!!!......So, hope your evening was a Happy and Blessed one!!
Inspired by Donna at 6:00 AM

Looks like we ALL had a blast last night! Thank you again for keeping him;o) I still ain't gettin that dog!!!!!

Sounds fun! Corky is a real cutie ~ but i don't think he would appreciate a pup trying to play with him while he tries to sleep! haha!
And not forgetting, William is a handsome boy!


Amanda- Thanks sweetie! You're right! He would Not like a puppy messing with him!!hughugs

Donna, you know you wanted that puppy, lol...but I agree, Corky might not take to the idea so well! Is this another author I'm being enticed with? What type book does she write? Will is just too adorable for words...
hugs

I´ll soon post pics of the baby dog I found, a cross between a chihuahua and a chupacabra (I call her chupahuahua hi hi hi), i could not resist looking at those sad eyes, and now, she is at home chewing our feet, hands, Michele's butt and everything .She is happy and chubby, makes me laugh a lot.
William handsome as always,with the photograpy smile :D

Hallo Donna, thanks for coming over and leaving your father's family came from Vienna. Its interesting but I have already heard of quite a number of bloggers, often Australiens, that they have relatives in Austria. Maybe you visit us one time? I'll check the name of your relatives in the electronic telephone book!
We will leave for a three days' hiking tour tomorrow morning. I am very excited about the trip!
Dear, have a nice weekend! hugshugs, Maria!

Y'all have such pretty babies Miz Donna! I know William had a blast getting to stay with you and Pop.

Now, why can't William have that puppy?

Awww, poohuahua's are adorable! I like mutts though :D

Sounds like you guys had a fantastic time last night!

Sandi-HAHAHA...Right! And the book is a "Dark Hunter" series. This is the first book I've read. Crystal said she has written lots of them...Happy night Girlfriend!hughugs


Faery- Awwww...you got a puppy! I Know it loves you already!! Have fun with it! Can't Wait for a picture of it!hughugs


Maria- Thanks for looking Maria! They were a very wealthy family. My Grandfather was over the Forest Ministry...He married one of their servants (Marget) and the family disowned him...They moved to America around 1918 or 1919. When the war broke out in Europe, the Nazi's took everything they had. Soldiers raped and murdered part of the family and used the mansion as a headquarters.....sad times...thanks for looking...Have a happy trip!hughugs


What a handsome boy your William is!!


Ahhh- too bad about the puppy....but I tell you- no matter how darn cute a puppy is in MY future I will have NO MORE DOGS! I love them...but I'm getting too old for the added stress and work and worry! ( LOL- and that's not like me at all!) But we have pretty recently had to put 2 of our 3 down! That's hard- when they get old and sick! :( My little poodle, Peaches , is over 12 years now, and not doing well!

A Bite of Country Cupcakes said...

It's Funny reading your post today...
Reminds me of mu childhood dog who would grt "terrorised" by my grandmothers pup...
Now the tables have turned and when she visits us my young dog does it to her!
WillIam is a good lookin' lad....

I don't understand while Crystal doesn't want a dog? It would give Pepe someone to play with!!

William is such a handsome boy. Sounds like he had fun with gammy and grampy. *HUGS*

DAWN!!!! Don't give mammy any idea's! Pepe already pee's and poops when he spends the night! We're keeping him this Saturday too!! Pepe can play with Will!! lolol!!!

So glad everyone had fun last night. Will is a happy boy; every picture I see he is just all lit up like a Christmas tree!! :)

Sounds like you and William had fun. He does take nice photos.


Cupcake- It's hard on the old animals to have a young pup around! Imagine yourself at 90 trying to care for an infant!!Lolol...no Way!!hughugs


Dawn-LOLHahaha...I Don't Know!!! She Should let Will have a puppy!!Hahaha...hughugs

Great photo of Will. Corky looks all tired out but so cute. I've never read her books before but I'll check it out next time I'm at Barnes and Noble. Have a good weekend and now I'm off to see your skywatch friday post.

Corky is beautiful. My little Temper lived to the age of 17. He just got tired and his body gave out. He had a great life though.

Willian is adorable. I'm glad you had fun.

So much activity at your place. I love coming over and seeing what you're up to!

Thank you Donna you are so sweet, yes the puppy is so cute, I posted the pictures and her story in my other blog and also my skywatch pics

Hi Donna William is a sweetie and Corky is very cute. have a happy day, big hugs!

Corky is a real cutie I could just give him a huge cuddle!!

Luiz- Thanks! Stop by Anytime! Your photos ate great!hughugs


Joan- Hi Girl! I used my balloon pic for skywatch as well!lolol...well it Is Sky!! Happy weekend!!hughugs


Eve- Thanks sweetie! Don't you just Miss them!!! Happy weekend!!hughugs


Faery- Oh! I'll be over to check the out!! Happy Weekend sweetie!!hughugs


Hi Dell!! I'll be checking to see if you've cooked up something Else delicious this week!! Happy weekend!!hughugs


Rosie! Hi Sweetie!! Thank You! We love him bunches...Happy weekend to you! Hope You're feeling better?!!!hughugs