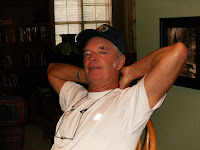 Well Henry came for a visit. Larry ended up cooking Brats with onion and bell pepper for lunch so I didn't have to try to figure anything out. He's very handy that way! Actually, he does do a lot of the cooking. Says he enjoys it. I did it for so many years that I think I'd rather do the cleaning. Speaking of cleaning, I got a lot of the hard stuff done(bathtub,toilets,etc) Never seems to be enough time on the weekends to get to it all. 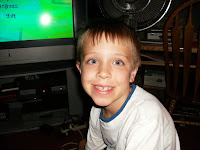 We ate lunch and just sat around playing catch-up on all the news from Henry.We've known him since we were kids in school. Really a sweet person who'd do anything for you. Even tempered (unless he's on a golf course) and a pretty funny guy. Lots of teasing on both sides. We've always believed one friend like that is worth 50 of the kind that you have to paste a frozen smile on your face just to get through the next hour. They're few and far between. We have another couple in San Antonio, Tom & Bev whom we've known for almost 40 years. Like I say, if they're willing to stick it out with you over the long hall, you've got true friends. Don't let 'em get away...
Today is also our Grandson, Williams 8th birthday! Happy Birthday Sweetie!!! We had a party for him before they left on vacation. Transformers all over the house!

Henry and Jane and their son Ryan own a house in New Mexico. They've just bought it so they have lots to do. We've been trying to get out there for a visit but something always pops up at work. Maybe someday.

Well guess I'll close for tonight. It's been a relaxing day but I still have a load of laundry calling my name.....night all.
Inspired by Donna at 5:33 PM No comments: