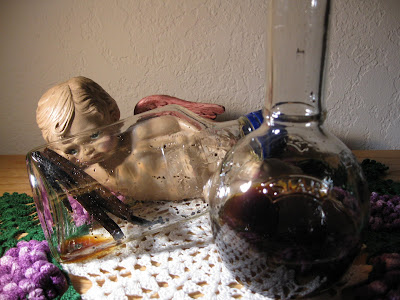 The bottle I "brewed" the vanilla beans and vodka in...and the bottle I transferred it to. 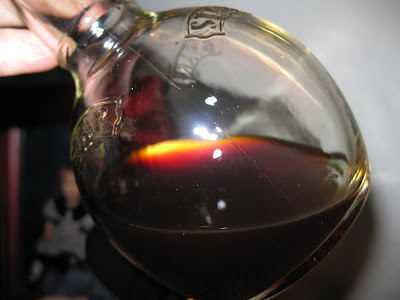 Look at how rich and clear it is! 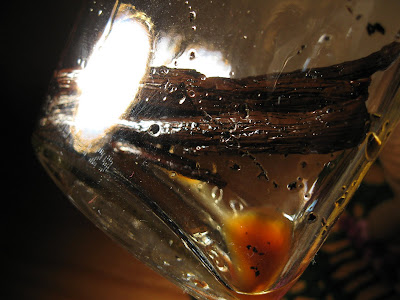 I used eight fresh vanilla beans and the 5th of vodka...and I let it "blend" for almost nine months!!Hahaaa....Oh Yeah Baby! Of course, you could start using it after about two months, and I Did! BUT, I just left the beans in the vodka and continued to use it in my cooking. Wonderful Stuff Miz Donna (Cottage Days)!!! I originally got the recipe from Donna... I'll NEVER buy the store brands again!!! EVER!! This home brew is SO Rich and dark! The longer you let it sit with the beans in instead of out, the better it is! I need to go get more beans and vodka for the Next batch! I don't want to get caught without my 'Nilla!!!Hahaa...Surprisingly, I found the fresh beans at WalMart!! Not One grocer had ANY fresh!!
So, here's my recipe: 8 fresh vanilla beans (watch out for price shock!! Just 2 beans were $8.00!! Go to the liquor store and get a good brand, 5th of vodka. That's it!!
Slice the whole beans right down the middle to open them up...Stuff them whole into the vodka. You'll have to pour out a little of the vodka so you can get the beans in. Or, put it in a larger bottle. Keep in a dark cabinet and take out to shake the bottle weekly.
I have now posted the Next Brenda Photo Challenge! Try out the NEW link system! I think you'll like it! Have a great night....Is tomorrow Monday again???LOL...Oh well, lets all have a Great week!
Inspired by Donna at 1:24 PM 16 comments: