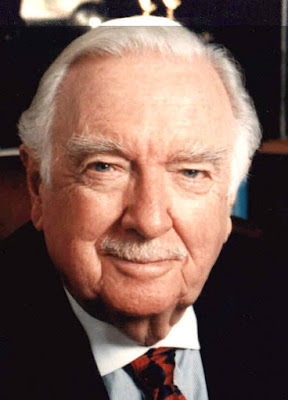 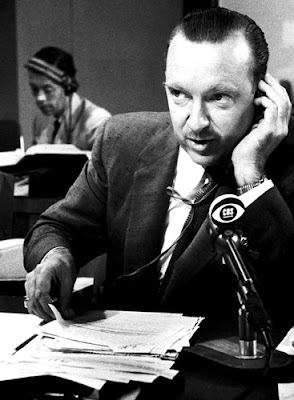 Walter Cronkite has passed at the ripe old age of 92...We heard about it last night while watching The Ghost Whisperer. Now here was a True journalist! They don't make 'em like him anymore, do they...True, he was a Democrat...but I truly did Not see him as one. He was fair and balanced in the truest form of the word. I believe that is the sign of a great reporter when you can make your audience unaware of your political views and still get the story across.
I grew up with Walter. He told me about JFK being shot...How Jackie just stood beside Lyndon Johnson...her mind and soul, numb from what had just transpired, in her pink, blood soaked suit...He took me to Viet Nam and showed me Jane Fonda sitting on a viet cong jeep, spouting mercurial words of hate against our beloved soldiers and country, who by the way, were fighting to see to it that she HAD the privilege to Do so and that others, in a war torn nation, Also had that same right...He took me to the Moon and showed me the endless possibilities of man's visions for our future, and I believed him. He had integrity. I will truly miss him.
Walter Cronkite
1916-2009
Inspired by Donna at 7:11 AM

I'll forever remember him as the voice of the news.

I just finished the book that he wrote in l996~he truly was a great reporter, and lead a wonderful life. We'll all miss him.

That was a lovely tribute, Donna. Obviously a man well respected.

I am weary of journalist who use TV as their private bully pulpit. Cronkite was serious about his role. He just told us the news and trusted his public to think through the complexities behind the story. I will miss that voice and his presence - hope all the kids in communications programs everywhere will use him as a role model. May he rest in peace.

I too think he was a journalist icon...he told the news the way it should be reported - times have changed - he takes with him a broadcasting era of integrity.