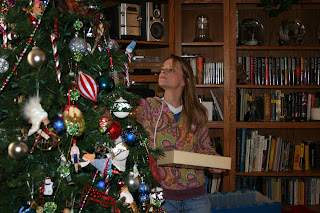 Well, today was the day that "she" had to come down! It's an absolutely beautiful day here. 78* as we speak!! Tomorrow it should be the same. So, In the living room, I dragged my feet to the tree and we started the "undressing" ceremony...pitiful. I miss it already. Everything went back into it's boxes, wrapped and petted, and now, all put away. Told Hubby not to put the tree back into storage. It's limping and a bit broken so it'll be a new one for us next year. We had this one for over five years and it's brought it's magic but it's time for a new one. The tree I had before this one, we kept it for fifteen years. It was an eight footer and I had hand wrapped each branch with lights. Took almost three days to do it, even with some help from my sister, Ruth Ann. But it was SO worth it. It was beautiful. I only used Silvestri Lights on it because they last for years. I never dreamed they'd last longer than the tree did!! Oh well, I'm already plotting for next year.
It was so warm here, the Granbabies asked for lemonade! They'd been out riding their bikes so when they hit the kitchen it was, "Can you make lemonade Gamma"? I did.....what a face! 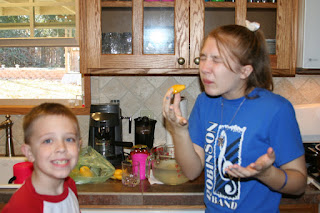 Anyway, after all that, it was time to clean, dust, etc. Hubby made some gumbo soup which hit the spot.
Well guess I'll let you get on with whatever you were doing before I interrupted your day. I understand a bunch of you are ill!!! Sending much love, happiness and healing your way!!!
Here's another useless tidbit for you to ponder:
Disney cleaned up the story of Snow White and the Seven Dwarfs for his feature cartoon. In the original Grimm Brothers fairytale the queen was condemned to dance in red-hot iron shoes until she died. Disney had her fall off a precipice to her death.
(The Ultimate Book of Useless Info by Noel Botham & The Useless Info Society)
Inspired by Donna at 4:35 PM 18 comments: