Busy Day and What Was That You Just Ate? 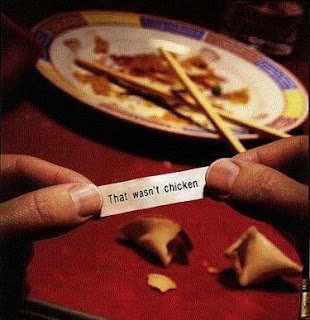 Well, it's been pretty busy here at work! Plenty of work to do. Had to update our computer program with the tax update and tax number registration so I can do payroll tomorrow. What a trip! Peachtree Construction 2008 is giving us headaches. Computer stations freezing. Culprit seems to be the last online update. Peachtree made us upgrade to the 08 version or they would not give us a new tax registration number...which you have to have, because they are phasing out the older versions. They get into your wallet no matter what you do. Either you have to update your accounting programs OR your computer systems....I was on hold for over forty five minutes! Yes, I know it's the first of the year but we were under the impression, that when we bought the new 08 version, the tax update came, installed...no such luck. Oh Well...it's done.
I've now officially lost four pounds!! I realize that it's all the "fluffy" stuff, but I'm really starting to feel a lot better. We get up every morning and have one or two eggs, and one or two strips of bacon with coffee. Nine AM is a string cheese snack. Lunch consist of one meat (any kind), either green beans or squash, or cabbage or broccoli...(any thing on the OK list) and desert is either cantaloupe, sliced or strawberries, sliced, topped with real whipped cream (no carbs in the real stuff). Then if you stay up after 8pm, a snack again of either almonds or a string cheese. You do this for two full weeks (14days). Then, if you want to lose more, do it another week and so on. Last time we did this, I lost 20 and Hubby lost 40. I guess that was after about four months. OF COURSE, later on, we would cheat a little bit....WHAT???!!....The main thing is if we'd still been eating correctly most of the week, we could have cheated and not put the weight back on...We didn't. After we lost the weight, we said to ourselves, "We did it"! How dumb!!! This is a Lifestyle....It will change you. For the better. We're trying and that's good enough for me.
Well, guess I've strained your eyes long enough...Have a peaceful evening and I'll talk at you tomorrow.
Inspired by Donna at 2:06 PM 13 comments: